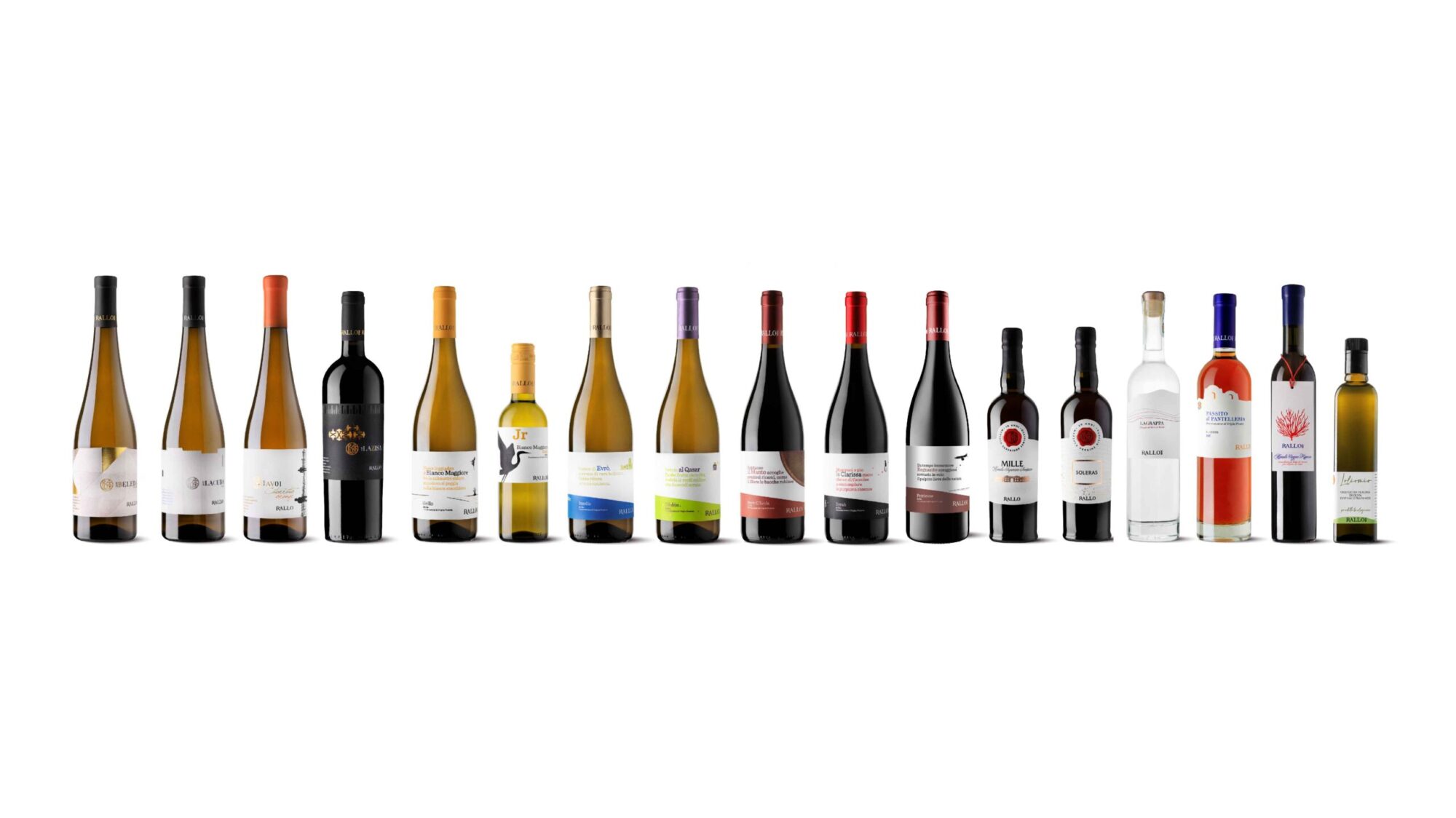 Enthusiastic “white wine supporters”, without omitting important reds and meditation wines, we represent Sicily and its vocation for white wines through wines of climate made with modern resources.  All our efforts are done to render the tastes and the flavours of the place of its provenance, though aromas and scents. The possibility of expressing ourselves is linked to vitality, to the rigorous cultivation method and the preserving of the impeccable fruit. We propose two product lines, plus a third, dedicated to meditation wines: the “Reserve – Single Vineyard” of a sole variety produced in a specific vineyard; the “Selection – Monovarietal”, a blend of the best grapes from different vineyards. Three are end-of-meal wines, a Passito di Pantelleria, a Marsala Vergine Soleras, refined for 20 years and a Marsala Superiore Semisecco refined for 10 years. Our authoctonous grape varieties are Catarratto, Grillo, Insolia and Moscato d’Alessandria for the whites, Perricone and Nero d’Avola for the reds and the international variety, Syrah.

Beleda is a 100% Catarratto, the flagship of our vineyards in Alcamo. A product of extreme elegance. At the nose stand out nuances of almond, field flowers, wisteria and  medicinal herbs. In the mouth it has a good character, juicy, with rare saltiness in an opulent and refined fruit. It is ideal to pairing with the Sicilian tradition pasta , such as pasta with sardines or with broccoli or still with soft cheeses.

Its label seems to be crumpled and it reminds to an imaginary paper – folding with gold leafs that show the plot cultivated with Catarrratto grapes seen from a satellite.

The name Beleda is an adjective used by an Andalusian wandering Ibn Jubair in 1185 during his travel in Sicily. With this adjective he named Alcamo illustrating it as a small town with a market and a mosque.

AV01 Among the fertile and sandy  hills of our vineyards in Patti Piccolo, was born a new wine entirely made by Catarratto Grape. A variety on which Rallo has invested and believes a lot, now also in orange version, free of Sulphites. AV01 tells our story, it is son of the land of Alcamo and it is an unequivocally natural choise. It will be a limited edition of bottles and allocated in exclusive territorial. It is excellent with  soups, legumes, and fresh vegetables. Ideal with fish dishes, shellfish and white meats, cheeses of medium seasoning.

LaCuba In the glass the wine is golden, with scents of loquat, cedar and passion fruit, broom and mimosa, mallow, mint and an intense briny smell. It has a rights freshness well balanced with good glycemic notes and energetic salty taste. A medium body white wine, whose fermentation takes place in wooden vats of 50 hl, perfect pairing of many dishes based on fish and even more elaborate dishes. It is aged in barrels for 6 months.

The label recalls the castello della Cuba in Palermo, one of the Norman Royal Residence castle. It is a tribute to an era that has seen the Sicily as a fertile and profitable land. La Cuba was built in 1180 by King Guglielmo II, in the middle of a large garden park called Genoardo that means garden or paradise on earth: Boccaccio (a famous italian writer of Renaissance) set a novella of the Decameron in the garden of La Cuba.

LAZISA Made with the best bunches of our Nero d’Avola. Its refinement is completed in wood for about six months. The spectrum of red fruit, typical of the cultivar in this wine is rather marked. Intense ruby red colour with a enveloping scent. To the nose stand out the fruity notes with red berries like currant and pomegranate. Soft and velvety taste with an excellent balance of tannins and acidity.

It is the perfect  wine for meat and game, aged cheeses and in general with strong taste dishes.

Another homage to a building of Norman age. The gold leaves on the label are a clear recall to the typical Arabic decoration muqarnas (wich means alveola). The Zisa is clearly inspired by Moorish architecture. The name Zisa is the proper name of a castle in Palermo chichis included in the UNESCO Arab-Norman Palermo World Heritage Site. It is built as a part of the large hunting resort known as Genoardo (Arabic: literally “Paradise on Earth”) that stretched with magnificent pavilions, blooming gardens and water ponds.

The white flowers and the fruits that remind of citruses, grapefruit and lime, compose the rich bouquet of this perfectly balanced and harmonic wine at the taste. The whiteness of the paper aims to draw the white Marsala salt pan where this wine originates. The yellow color suggests the color of wine as well as being a tribute to the Sicilian Sun. White Egret is the name of a bird  of the Heron family who winters in the Natural Reserve of Stagnone, this explains the symbolism of the label.

Perfect with fish, grilled vegetables and white meat. Superb with cous cous of fish or vegetables.

Evrò is named after the Queen Bianca from Navarra, better known as “Regina Bianca” (White Queen). White are also the grapes that give origin to this monovarietal Insolia. The label summarizes the history of the Queen Bianca of Navarra countess of Evreux, the last sovereign of Sicily, a refined beautiful woman. Her history is intertwined with the castle of Alcamo portrayed in our label as the main symbol, along with the crown. The turquoise color emphasizes not only the freshness of the wine but reminds to the “blue blood” of the queen. Even the platinum color of the capsule surrounds the head of our wine as a precious metal crown. A seductive wine. It is wonderful as a break and also a nice aperitif. It’s a perfect companion to seafood, oysters, lobsters and caviar.

The wine is the dry version of Zibibbo, with it’s pleasant aromas of peach, almonds and orange blossoms. The name Al Qasar, cassaro, is an Arabic word meaning fortress, Castle but also centre, main street. The choice of the Arabic name is dictated by the fact that the fruit from which this wine is made is Zibibbo, an aromatic grape variety imported in our own land from the Arabs. In Patti Piccolo the vineyards of Zibib- bo are heading Southeast, the same as the Mecca for those who seek it from Italy. In Italian language the word “raccolto” has got a double meaning prayer and harvest. Excellent as an aperitif, perfect with raw fishes or smoked fishes. It is also appreciated with foie gras, tempura or blue cheeses.

As the rubies embellish the cloak of the Norman sovereign Ruggero II, so the grapes of Nero d’Avola decorate our vineyards. The name of the wine reveals the tribute to the cloak of Ruggero II King of Sicily, this garment was erroneously known as Coronation cloak, it was made in tiraz (the weaving factory) of the Royal Palace of Palermo in 1134. This is an handiwork of rare magnificence, semicircular and with over three meters in aperture diameter. The decoration consists of precious stones like rubies; immediate is the comparison between rubies and the berries of Nero d’Avola grapes and between vineyards and the cloak itself. The symbols in the labels recall the fabulous embroidery of the cloak of Ruggero. It goes very well with red meat, it is the ideal pairing of a tuna steak. Excellent with cheeses, especially hard cheeses.

This wine is a successful example of balanced wine with a gently spicy note. The colour is shinning ruby red with violet nuances. It has got an intense bouquet of mulberry and spicy notes like black pepper.

In this label we played with the ambiguity of the origin of the grape Syrah. Some claim it has Persian origin, other French, we think it has Sicilian origin! In the vineyards of Patti Piccolo, in Alcamo, stood a nunnery of Poor Clares. The imagination has made us think that one of those nuns, strolling in our beautiful countryside, has discovered the purple berries of Syrah. On the label we represented the walk of the nun among the vineyards, now depicted in the foreground, now in the background. Small red dots on a black background of our labels symbolize the rows full of Syrah grapes. It is superb with salumi, meats, game and lamb. It pairs with smoked cheeses and hard cheeses.

The Regnante from Perricone grapes, it is aged in barrels for more than one year. It is a well body red wine, elegant with particular and rare organoleptic qualities typical of its terroir. In the nose it is spicy, with intense juniper and black pepper. In the mouth there are the classical red fruits, including the Marasca, the currant, plums and cherries.

It is a wine of extraordinary elegance, with velvet and soft tannins and a long persistence. It’s perfect with vegetables in soup, hard cheeses and red meats.

Precious reserve aged beyond 20 years in small oak casks, it is the skilful result of a correct vinification and a patient ageing according to the traditional Soleras system with three overlapped orders of casks. A tribute to the town of Marsala and to Marsala wine, a product that has marked the history of the Italian winemaking. The white label paper recalls the famous salt pans and the small gold leaf remind to the sandy soil. The waves obtained through a glossy silkscreen printing in relief are a tribute to the sea lapping at the roots of the grapes Grillo from which this twenty-year product is obtained. The word Soleras, explicit reference to the production method, is also enclosed in a symbolism: a rectangular fortress that symbolize the baglio of Rallo winery. Great meditation wine, ideal pairing for blue and aged cheeses or the most delicious chocolate. If served cold, it is an original aperitif.

Aged in small oak casks, it is an excellent choice at the end of the meal especially when combined with Sicilian almond pastries. Also ideal as meditation wine to be sipped slowly at room temperature or slightly chilled. Easy to understand the label of our Marsala Superior Semisecco “Mille”.
The name is a tribute to the Italian history, that has seen in the front line even our winery. Our baglio, a traditional architectural expression of the Sicilian rural economy, is faithfully replicated through a golden leaf. Its image is reflected in the water of the sea from where the Mille landed on May 11, 1860. Ideal pairing with cheeses or almond Sicilian pastries. If served cold it is an original aperitif.

Intense and powerful dessert wine produced with Moscato grapes cultivated on the vulcanic island of Pantelleria.
It has hints of apricot and honey on the nose, jam and fruit on the palate. A cutting that recalls the white roof of the Dammusi in Pantelleria. Small amber layers surround the windows and make sense of life inside them. The capsule wants to recall the blue of the most different shades of the island of Pantelleria: the sea, the sky, the lake of Venere that is close to the Bugeber district from where this wine originated. Delicious if served with fruit-based desserts, with typical Sicilian pastries and also with medium or high-seasoned cheeses.

The quality of a distillate begins with a great attention in the selection and choice of raw materials, in this case the pomace (vinaccia) of our Nero d’Avola distilled in 2008 at Valdotaine, the distillery in Valle d’Aosta Valley where the alembic stills, in shiny handmade copper using the discontinuous with head and tail cutting method, distill small quantities of unique spirits.Clear, soft and delicate colour. Floral and fruity aromas at the noses with persistent smell of wildflowers, white peach, citrus and delicate spices.Round, fluffy-bodied, with an ending of elderberry and liquorice root. Good persistence.

Refined reserve aged over fifty years in small oak barrels.
A limited production of bottles for a precious wine witness to over half a century of history.